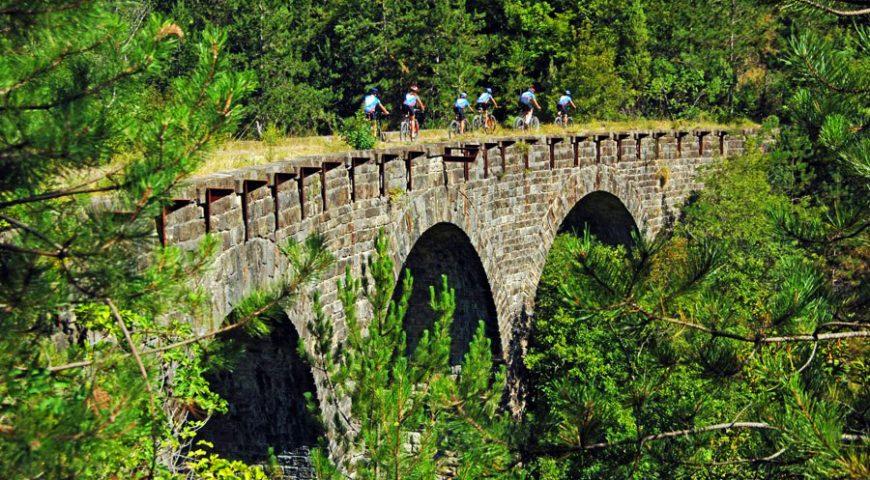 Cycle along the Parenzana – From Trieste to Poreč

Towns on the Northern Adriatic and especially those on the Istrian Peninsula are remarkable in their beauty. Istra has a special Mediterranean charm, considered by many as the new Tuscany, with far more homely people and indigenous surroundings. Istria, with its numerous roads, side paths and mild climate, can easily be ranked as one the most beautiful parts of Europe for cycling. Istria is connected and interweaved by many cycling routes – both on the Slovenian and Croatian Part of Istria. Among the prettiest and well known is the Parenzana Trail – a former railway route that connected Trieste in Italy with Poreč on the Croatian side of Istria. Parenzana – cyclist trail of health and Friendship.

Cycling on the Parenzana is a true cycling poetry. The goal is to cycle to the finish line in Poreč, to cycle a route that is 130 kilometres long, a route that was once a railway, and while doing this one intensively experiences the landscape, towns and meets the local people. Parenzana is in its core a cycling adventure with experiencing the best of Istria. The route that goes through Italy and Slovenia is asphalt / paved and one cycles through towns which are linked well to tourism and offer plenty of good infrastructure. When one pushes the pedals towards the Croatian part of Istria, an even better cycling exploration begins on the narrow route of the former railway, with the surroundings and paths kept as they once were. One cycles on a stony and gravel route, part also on asphalt and part on the typical Istrian soil with its well known red color – a part of the route from Vižnjada to Poreč. The tour is not demanding, but it also isn‘t considered as easy, for one has to conquer several gentle slopes – the toughest one being the one from Mirna to Motovun – as well as several stony descends, where one has to hold the handlebar firmly in the hands.

Parenzana is one pure cycling pleasure. On our cycling path we indulged with excellent Istrian culinary, saw charming towns and villages – Grožnjan, Motovun,… visited Sečovlje Salina Nature Park and felt the warmth of the Adriatic Sea. We slept in small, boutique hotels and with local people on agro tourisms. These are considered as a good choice, an excellent experience for one is in close contact with homemade food/culinary and local Istrian people. If we add numerous well known taverns with Istrian wine, the package is complete. Cycling on the Parenzana is more than just cycling, it is an active experience of Istria, taking it all in – in slow sips.